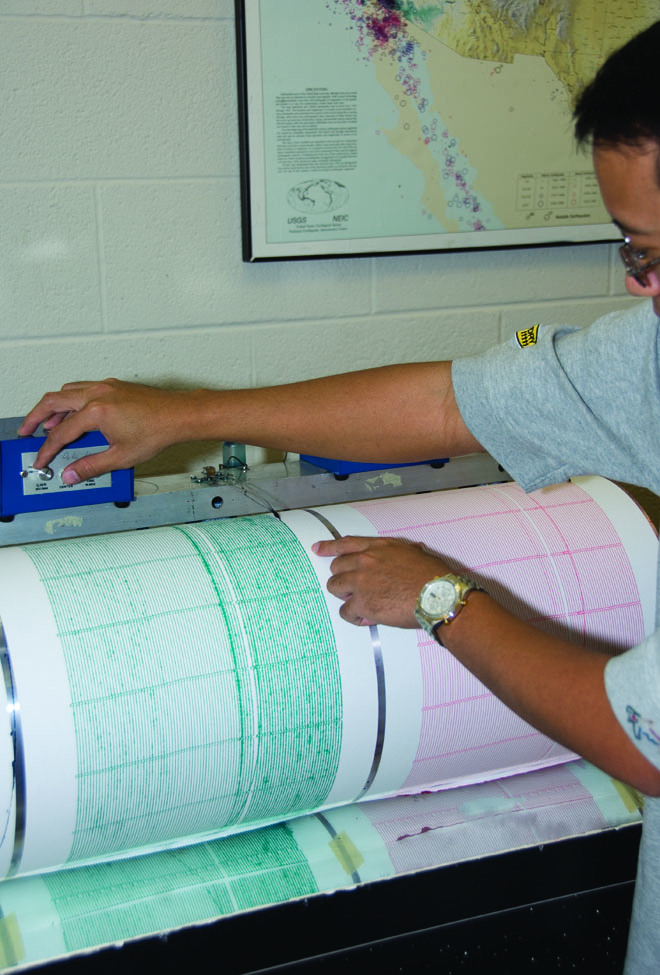 Seismographs, such as this one at Indiana University, record the waves generated by an earthquake. Portable seismographs can also be placed in an area to record aftershocks. By analyzing these seismic records, scientists can determine how far away the earthquake occurred and how strong it was.

Is There a Major Earthquake in Indiana’s Future?

Seismologists do not yet have a complete understanding of the complex processes that trigger earthquakes and cannot predict when earthquakes will happen. At this point, no one can say with any certainty when or if an earthquake strong enough to cause significant property damage, injury, or loss of life in Indiana will occur. However, considering the prehistoric evidence of strong earthquakes having epicenters within Indiana, the recent history of damaging earthquakes in Indiana, and the presence of compressional forces squeezing the rocks and great depths, it is reasonable to conclude that we do, indeed, face the possibility of experiencing a strong earthquake at some point in the future.

Preparing for the Next Quake

While we can’t prevent earthquakes, we can reduce their disastrous effects by assessing the risks and preparing for them. Assessing risks involves determining the probability of an earthquake occurring within a particular region, and may also involve studying how the local soils respond to severe ground shaking. The composition, structure, thickness, and moisture content of a soil, which can vary greatly from one location to another event within a small area, determines how it will behave during an earthquake. An accurate assessment of an area’s level of risk requires carefully researching the local geology, the engineering properties of soil, and the infrastructure. This information can then be used to determine where and how structures should be built, which existing structures should be reinforced, and how to address human needs.

Preparing for an earthquake includes building critical structures—schools, hospitals, dams, and bridges—so that they are able to survive the maximum level of shaking likely to occur. Being prepared also entails developing plans of action for schools, businesses, and homes, as well as plans to coordinate activities by emergency response agencies. Educating people about how to prepare themselves can lessen the risks and impacts of an earthquake on their homes and personal safety.

As long as compressional forces continue to squeeze the rocks beneath the surface of the central United States, earthquakes will occur. But because long periods of time pass between damaging earthquakes in this region, it is easy for us to become complacent and inadequately prepared.

Studying the stresses, strains, and movements of masses of rock miles below the surface of the Earth presents problems of immense complexity for scientists, but until those problems are solved, we cannot know when, or even if, a major earthquake will occur. But, if one does happen, let us be prepared for it.