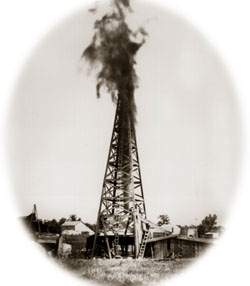 The history of oil and gas development in the state of Indiana officially began in the mid-1800s with the early settlers' practice of drilling for salt water. Salt was a necessity for the preservation of foodstuffs and critical to the early state's agricultural industry; shallow wells were sunk in many parts of the state to obtain salt water that could be evaporated to produce salt. Drilling was probably accomplished by using a "spring pole" method. Early settlers also became aware of gas springs and oil seeps along the Ohio River in Harrison and Crawford Counties.

Following the news of the success of Colonel Edmond Drake's oil well in Titusville, Pennsylvania in 1859, oil exploration moved westward into Ohio and Indiana. Between 1862 and 1869, wells were drilled in Pulaski County and Vigo County and gas and oil were discovered but not further developed. Gas was discovered in what would become the Trenton Field near Eaton in Delaware County in 1876. Beginning in 1886 and continuing into the first decade of the 20th century, gas and then oil were discovered and developed in east central Indiana. A wild untethered boom ensued that ultimately resulted in thousands of wells being drilled; this was America's first giant oil field (greater than 100 million barrels of oil). The gas was used to attract and then fuel numerous industries in the region. In fact, the existence of Muncie, Anderson, Marion, and Kokomo as manufacturing centers can be directly attributed to the development of the Trenton Field. In addition to these industrial complexes, the oil boom led to the development of refining and petrochemical industries in the Calumet region. The boom quickly ended in the beginning of the 20th century because wasted resources and unregulated drilling practices caused a precipitous drop in production. Unfortunately much of the resource was wasted or lost through the burning of gas at the surface and the contamination of oil by fresh water within the subsurface reservoir.

As gas and oil production quickly declined in northern Indiana, new discoveries were being made in the southwestern part of the state known as the Illinois Basin. Production from fields in Vigo and Pike Counties was rapidly followed by new discoveries in Sullivan and Gibson Counties. Unlike the single field of northern Indiana that produced from a single reservoir, these new discoveries produced from many smaller fields and a variety of different reservoirs at different depths. Also, unlike the Trenton Field, the Illinois Basin fields produced mostly oil, not gas. Soon all the counties located in the southwestern part of the state were contributing to oil production. Production peaked in 1956 at over 12 million barrels for the year. Since that time both the number of holes drilled and the production for the state have declined.

Since the early 1960s, the amount of oil produced in Indiana has declined. Close examination of this decline reveals that changes in the price of oil are directly related to the number of wells drilled and consequently, the volume of oil produced. For instance, the reversal of the steep decline in the 1960s and 70s can be attributed to increased drilling in response to the energy crisis of 1973 and Iranian crisis of 1979. After 1986 a steep declined resumed, resulting from a dramatic lowering in the price of crude oil. In this same time frame, the number of holes drilled within the state declined from more than 1,200 per year in the early 1980s to around 200 per year by 1997. While most new holes are drilled as development wells in existing fields, a low level of "wildcat" exploration still takes place within the state. With oil prices approaching $100 per barrel in 2007, exploration for new reserves has resulted in an increase in the number of holes drilled.

The current hot play is the New Albany Shale gas play which is utilizing state of the art completion technologies to access and produce natural gas from this unconventional reservoir. Renewed interest in the New Albany began in the mid-1990s and related drilling has accounted for nearly 500 wells since that time. Initially focused in Harrison County, where New Albany gas production was discovered in the late 1800s, successful exploration has more recently expanded to several other counties in southwest Indiana. Although wells with initial production test rates (IPs) typically range from 20-400 MCFPD (thousand cubic feet gas per day), some wells northern Daviess and in southern Sullivan Counties are rumored to have tested more than 1 MMCF (1 million cubic feet of gas per day). Many of the New Albany wells are being drilled with one or more horizontal boreholes that extend outward from the surface drill-site over a distance of one-half mile to nearly a mile. In Harrison County, the New Albany occurs at depths ranging from 500-1200 ft.; in some of the newly-drilled areas the New Albany is encountered at greater depths, around 2,000 ft. in Daviess County, for example. Additionally there is significant interest and development work ongoing in the coal measures of the southwestern part of the state. Here shallow drilling is tapping unconventional gas known as “coal bed methane” or CBM.

There is a fair potential for the discovery of significant new reserves in the state. Much of the state has been thoroughly drilled; however, this drilling reached only the first few thousand feet of depth. A considerable portion of the subsurface remains unexplored, and many thousands of feet of potential reservoir exist, especially in the southern portion of the state. Although the deep subsurface geology of this region is thought to be similar to northern areas of the state, details of thermal maturity, migration pathways, and trapping mechanisms are unknown. In addition to untested geology, the application of new technologies to explore for and produce oil and gas could hold the key to unlocking some of Indiana's resource potential. These new technologies, some of which are being used in the development of the New Albany Shale as an unconventional gas source, include the application of advanced seismic acquisition and processing techniques, new drilling technologies including horizontal drilling, and complex completion techniques such as CO2 stimulation.

Contact the Publication Sales Office of the Indiana Geological Survey (IGWSinfo@indiana.edu, 812-855-7636) and the geological surveys of surrounding states for information about publications. Numerous national and international trade journals and technical publications describe contemporary aspects of the industry as well as the economic and technical factors that affect it. Some of these include: Oil and Gas Journal (Pennwell Pub.); World Oil (Gulf Pub.); Petroleum Independent (Independent Petroleum Association of America); Proceedings of the Society of Petroleum Engineers; and the Bulletin of the American Association of Petroleum Geologists.