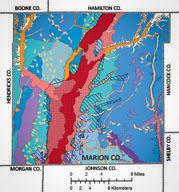 Marion County, Indiana, is located in central Indiana and is the site of Indiana's capital and largest city, Indianapolis. The county is in the physiographic province known as the Central Till Plain Region and is underlain in most places by thick deposits of pre-Wisconsin and Wisconsin glacial materials. These unconsolidated glacial sediments overlie bedrock units composed of limestone, dolostone, shale, siltstone, and sandstone ranging in age from the Silurian through the lower Mississippian. The character of these glacial and bedrock materials affects a wide variety of environmental conditions, including the availability of drinking water and building materials and the character of the landscape we live on and its response to different land uses.

The Marion County Geologic Atlas includes an interactive map component whereby anyone with an Internet connection can produce and print custom maps of all or part of Marion County. Map layers pertaining to bedrock geology, surficial geology, hydrology, infrastructure, and imagery layers are included. In 2011, illustrations and educational summaries and discussions of geologic maps, terrain images, and databases that complement the IMS were added to this Web site. 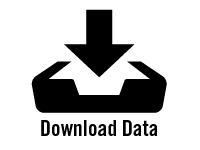 A study to identify and map the three-dimensional distributions of major aquifer systems, and the hydrogeologic settings they occur within, was conducted by the Indiana Geological and Water Survey (IGWS) in cooperation with the Marion County Health Department, Bureau of Environmental Health, from 1989 to 1993. The overall purpose of that project was to prepare interpretive maps of geologic and hydrogeologic elements that influence the occurrence, movement, and relative sensitivity to contamination of groundwater within the different hydrogeologic settings of the county. This Web site draws from the information compiled in this earlier study, as well as other IGWS mapping projects.

The development of the Web site is funded by the IGWS and the Great Lakes Geologic Mapping Coalition.