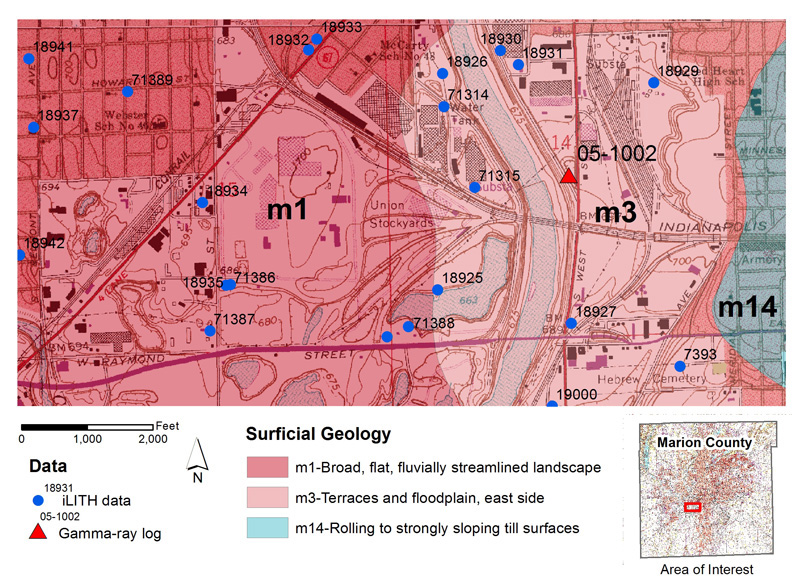 Figure 1.
The surficial geology in the central part of Marion County, Indiana.

Hydrogeologic Framework of a Sand- and Gravel-Dominated Area

This example highlights the mapping format employed in the White River valley and adjacent parts of its major tributaries where the late Wisconsin deposits consist chiefly of sand and gravel. The area selected for this example is located north of Raymond Street along the northern edge of the Maywood quadrangle (sec. 14 and 15, T. 15 N., R. 3 E.) (fig. 1). This area is situated in the center of the outwash plain in the White River valley, and is representative of the hydrogeological conditions typically found in this type of setting. Sand- and gravel-dominated sequences are characteristic of a wide zone that extends completely across Marion County from north to south along the White River valley, and they contain the major source of groundwater in the county. Geologic maps available for the Maywood quadrangle area include: glacial terrains (fig. 1); unconsolidated thickness (fig. 2); bedrock elevation and geology (fig. 3); and hydrogeologic settings (fig. 4). 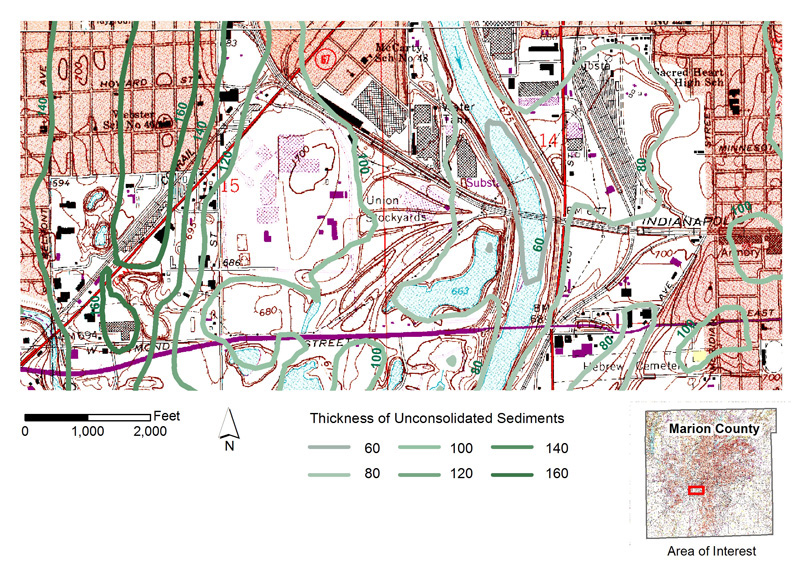 Figure 2.
The thickness of unconsolidated materials in the central part of Marion County, Indiana.

Most of the outwash plain in this area is part of a broad, very flat terrace that lies between Eagle Creek on the west and the east fringe of the White River valley (fig. 1). The terrace slopes gently to the south at about 8 to 10 ft per mile (2.4 to 3.0 m per 1.6 km) and, in this area, is about 690 to 700 ft (210.3 to 213.4 m) in elevation. Much of the landscape within the map area has been severely altered by urbanization and sand and gravel mining; however, there are a few very small terraces whose surfaces lie slightly above the general elevation of the main outwash plain, and whose shapes show a prominent down-valley orientation. These characteristics are similar to those exhibited by the much more pronounced features in the valley further to the south, and are suggestive of large-scale streamlining by meltwater outbursts.

Another key feature of this landscape is the fact that the modern White River channel obviously does not coincide with the main axis of the former glacial sluiceway. This situation is typical in many parts of the valley, and points to the fact that parts of the modern White River may have little relation to the massive meltwater rivers that created the main bodies of outwash that define the axis of the valley. The present location of the modern channel probably reflects more recent channel migration associated with the relatively small, postglacial river.

The unconsolidated materials overlying the bedrock surface in the selected area in the Maywood quadrangle range from 60 to 160 ft (18.3 to 48.8 m) in thickness (fig. 2). 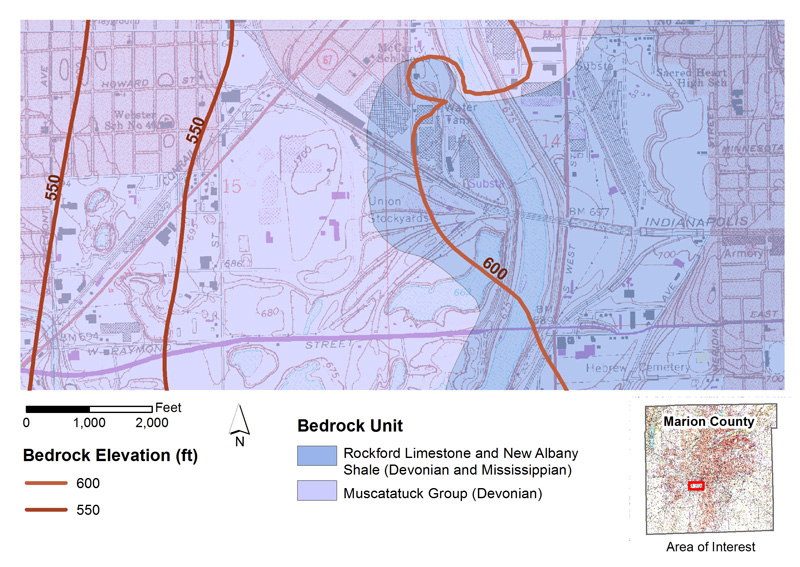 Figure 3.
The bedrock elevation and geology in the central part of Marion County, Indiana.

The White River valley in the Maywood quadrangle generally parallels a sizable bedrock lowland developed chiefly in the New Albany Shale (fig. 3). The evolution of the lowland appears to be complex, with some parts containing Illinoian and (or) pre-Illinoian deposits, but others evidently filled entirely by Wisconsin sand and gravel. It seems probable that the lowland has assumed its present form gradually through time, having experienced erosion by meltwater and ice during several glacial episodes, including one or more of the Wisconsin glaciations.

The part of the river valley represented in this example lies over the broad floor of the bedrock lowland, and is close to the overlap of the New Albany Shale on the Devonian carbonate rocks. The elevation of the bedrock surface in the immediate area of this example is sufficiently low relative to the structure of this contact to expose an area of Devonian limestone in section 14. The limestone found in the subsurface in the Maywood quadrangle is a protuberance from the much larger area to the north underlain by Devonian limestone. 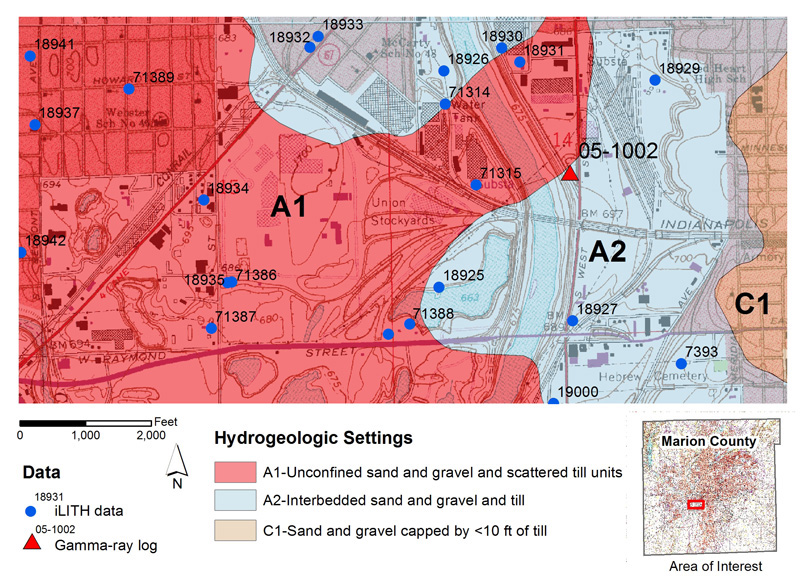 Figure 4.
The hydrogeologic settings in the central part of Marion County, Indiana.

The White River is the most important hydrologic feature in the example area and acts as the regional discharge area for all aquifers. The water table is relatively high but has a low gradient sloping toward the river. The absence of any capping silt or clay makes this type of area very sensitive to contamination (fig. 4).

The example area represents the variability in the distribution of buried fine-grained till units along the axis and fringe of the White River valley. This variability shows that the main valley is not a simple geologic system. Late Wisconsin till units are absent or discontinuous, and lower pre-Wisconsin till units are much less abundant than the fringe areas of the valley. However, their discontinuous nature can make site investigation difficult. Movement of contaminants that are denser than water is often difficult to track under these conditions.