The Indiana Geological and Water Survey (IGWS) has created the "Indiana Historical Aerial Photo Index" (IHAPI) interactive map to facilitate the identification and retrieval of historical aerial photographs. In the past, anyone interested in using historical aerial photos would have to physically visit an archival collection, and use the paper copies of index maps to locate an area of interest and find the photo ID. IHAPI allows users to easily locate a site of interest and determine unique identification numbers for individual photos on all index maps for a given area of interest. Copies of the photos can then be ordered from various archival collections, including the IGWS archive.

Before attempting to use the IHAPI map, we strongly recommend that users read the Archival Organization to better understand the way archives captured the imagery and then organized and indexed the large numbers of paper copies of images that comprise a survey for any given county. Also please read the instructions page to better understand the tools available on the interactive map, and the suggested methods of discovering IDs for photos that show a particular area of interest. 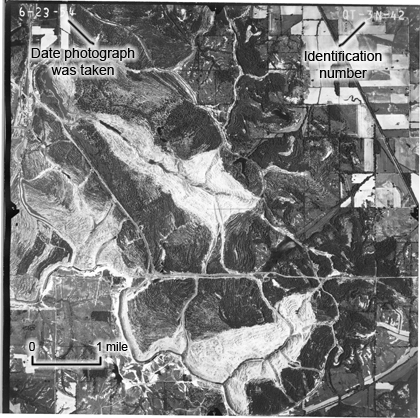 The scale of the photos is approximately 1:21,000 and, for reference, a scale bar of 1 mile has been superimposed on this example.

Beginning in the 1930s, aerial surveys of Indiana counties were conducted about every 10 years; between the 1930s and the 1970s, more than 100,000 aerial photos of the state were taken. Copies of many of these black-and-white photos exist in archives of the Indiana Geological Survey, the Indiana State Archives, and various libraries and governmental agencies. A concise discussion of the uses of aerial photos can be found here.

Every historical aerial photograph has a unique identification number (ID) in its upper right corner as illustrated in the figure on the right (click to enlarge the image). The date that the photo was taken appears in its upper left corner. Anyone interested in retrieving a particular photo from an archival collection must first determine its ID number.

For most counties, aerial surveys were conducted along north-south flight lines, although east-west flight lines were occasionally used. Along each flight line, photographs typically overlap (shown below) by as much as 60 percent, so that overlapping pairs of photographs can be viewed stereoscopically. Adjacent flight lines also overlap.

For each county-based survey, an index map of the county was assembled by stapling the individual photos together to create a mosaic. The mosaic, containing hundreds of individual photographs, was then re-photographed to create a large-format (typically 20 by 24 inch), low-resolution photomosaic index. In the past, you could obtain identification numbers of individual photos by physically visiting an archive and locating a site of interest on a paper copy of the photomosaic index. The appropriate individual aerial photo could then be retrieved from the archival collection.

NOTE: The individual photos that are available from archival collections have resolutions that are much superior to that of corresponding photomosaics.

Contact archival collections to determine the availability of your particular photo of interest, as well as fee schedules for obtaining copies of the photo. 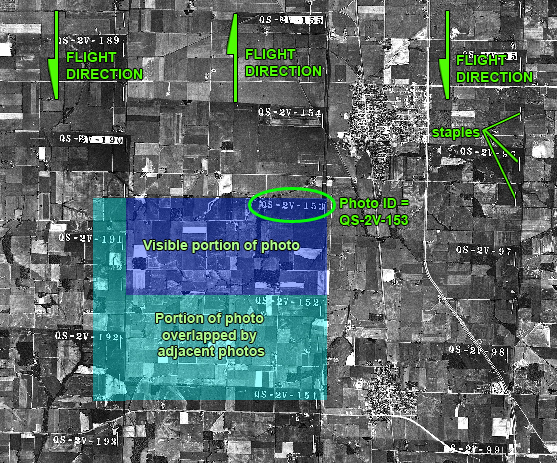 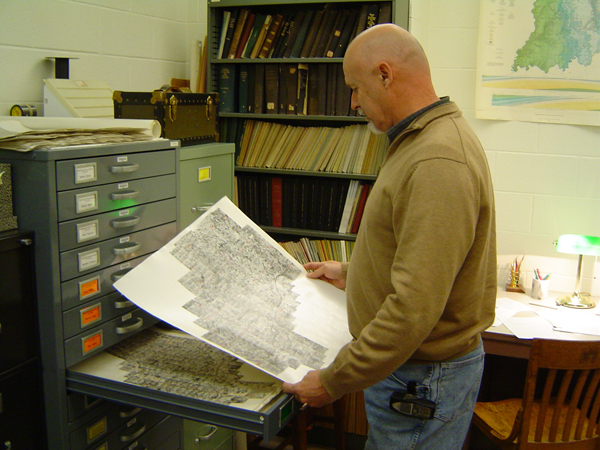 In the past, in order to obtain an historical aerial photo, it was necessary for a user to visit an archive and locate their site of interest on a photomosaic index map for the county and year of interest.

This photograph was taken in the archives of the Indiana Geological Survey, which contain more than 950 county-based photomosaic index maps for various years. 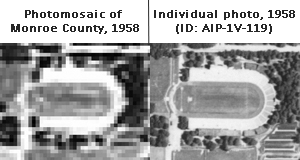 A photomosaic (upper left) has much poorer resolution than an individual historical aerial photo (upper right). Also, features on photomosaics have locations that are much less accurate than those on individually georeferenced aerial photos.

Shown above is the stadium formerly used for the 'Little 500' bicycle race. The site is now occupied by the Indiana University arboretum. 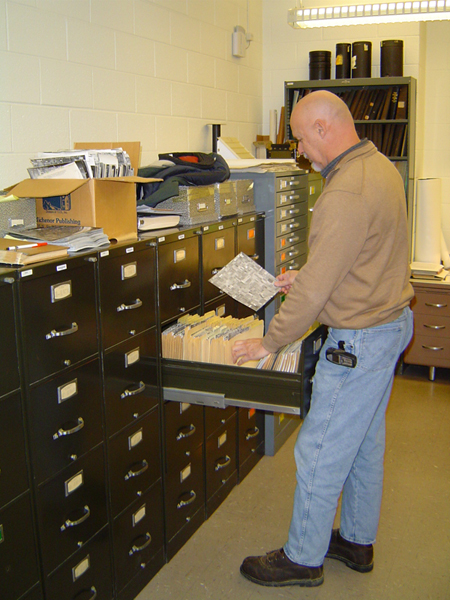 In the past, after using a photomosaic index map to obtain a unique indentification number for a photo of interest, the user could then retrieve the individual photo.

This photo was taken in the archives of the Indiana Geological Survey, which contains about 40,000 photos. 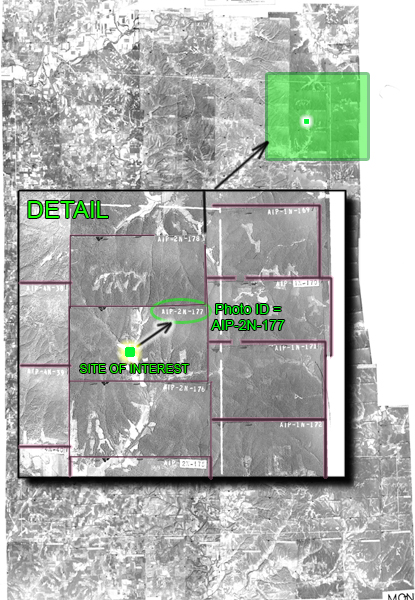 On this low-resolution photomosaic index map for Monroe County in 1946, the location of a site of interest is found to be in the northeastern part of the county. It can then be determined that the site will appear on the historical aerial photo whose identification number is 'AIP-2N-177.' Using this identification number, the individual higher-resolution photo can then be obtained from an archive.