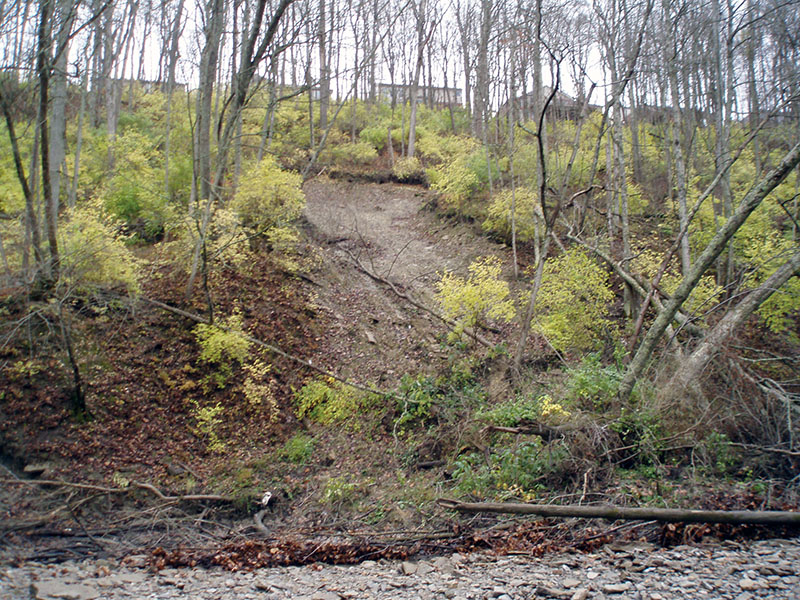 Evidence of a recent translational slide in the Cincinnati area (from Potter and others, 2013).

Landslides are geologic phenomena that can happen suddenly or through imperceptively slow downslope movement. In either instance, and particularly in an urban setting, their effects can be catastrophic, both personally and economically. For example, the Cincinnati area is one of the most active regions in the country for landslides. The per capita costs to prevent and mitigate their effects are among the highest in the nation. With a better understanding of the underlying geology and the geologic processes at play, however, successful property development on hills can be accomplished.

Gravity is a constant force on all earth materials. Soils perched on slopes naturally move downhill as part of the process of erosion. Soil that moves downhill slowly is said to "creep", and its movement is often slow and shallow enough to be anticipated and managed with a modest effort. A "translational" landslide can happen rapidly and result in all of the soil on a hillside being stripped off and filling the area at the bottom of the slope. Prevention of a translational landslide, or its subsequent cleanup, can be significant. A third type of landslide is "rotational." It, too, can be slow, but it is a deep movement of the soil, and its effects can be devastating; for example, the 1973 Mt. Adams slide in Cincinnati cost tens of millions of dollars to stabilize after it had destroyed two streets and sixteen houses.

Of course, the best way of circumventing the damage brought by landslides is to avoid locating in an area with a proclivity for such mass movement, or even building in a landslide-prone area. Soil and geological experts identify these areas by researching the history of the site, inspecting the soils and rocks types, making geotechnical borings and measurements, and measuring the slope of the land. Nearby or adjacent properties may also give clues of previous landslide activity.

A recent publication, "Landslides and Your Property," focuses on the greater Cincinnati area, but also pertains to parts of Indiana, Kentucky, and Ohio. It was a co-production of those three state geological surveys and the University of Cincinnati. Written by Dr. Paul Potter, professor emeritus of the University of Cincinnati, and his colleagues (Potter and others, 2013), its publication was supported by Duke Energy. It is available from the Indiana Geological Survey for purchase or free download (as a pdf).