In the most recent ice age, which lasted from 2 million to 10,000 years ago, vast seas of ice called glaciers covered much of Indiana. As the glaciers advanced into southeastern Indiana, they scoured the land and exposed the sediments left by a much older shallow inland sea of the Ordovician Period (510 to 438 million years ago). This sea covered most of North America, including Indiana, during the Ordovician. In southeastern Indiana, deposits from this vast inland sea are most easily viewed along road cuts and in stone quarries. In fact, if you drive one mile south of Richmond, Indiana on U.S. 27, you can see a large road cut exposing a swath of the ancient Ordovician sea bottom.

As you view the road cut, imagine what these seas were like over 400 million years ago: the number of families of organisms was increasing, making the seas richer in invertebrate life. One group that increased in diversity and sophistication in the Ordovician were the marine predators. And one of the most ferocious predators of all in the Ordovician were nautiloids, shelled marauders of the shallow seas. 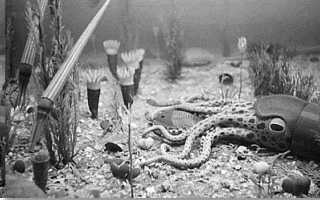 Like nautiloids of today, Ordovician nautiloids had a shell in which the animal lived, a shell that the animal itself created with bodily secretions. As the nautiloids grew, they secreted a new, larger living chamber, which they added on to the smaller, old living chamber. In present-day nautiloids, the shell twists around itself in beautiful whorls as the animal adds larger and larger chambers. In the Ordovician, however, nautiloids had not yet evolved a whorled shell, and their shells were long and straight. And because the size of the chambers increased as the animal grew, the straight shell took on a cone-like shape. Nautiloids in the Ordovician Period had straight shells, whereas those in the Silurian were curved and those in the Devonian became coiled. Can you think of one factor that could have contributed to the evolution of curving, and then coiling, of nautiloid shells? (Hint: Do you think it would be easier to move around, feed, and reproduce with a barrel tied to your back, or a fifteen-foot length of stove pipe?)

At the large end of the nautiloid "cone," the animal would stick out its many tentacles and swim along above the ocean bottom, searching for prey such as trilobites. Present-day octupi have eight tentacles, but nautiloids in the Ordovician had many more, perhaps as many as one hundred. And their shells were long, reaching up to fifteen feet in length. Imagine that you are a trilobite (an ancient arthropod that looked like a pill bug) and you see a 15-foot-long cone with one hundred tentacles reach out to grasp, subdue, and devour you; with this image in mind you can appreciate that these nautiloids were fearsome creatures indeed!

At the end of the Ordovician, there was a dramatic extinction in which 100 families of marine invertebrate animals disappeared. This Ordovician extinction was second in scope only to the huge extinction at the end of the Permian Period (225 million years ago), in which 90 to 95 percent of all marine species vanished. The Permian extinction is thought to have resulted from greenhouse gas-induced global warming. But why was there a sudden decrease in species diversity at the end of the Ordovician? One contributing factor may have been that glaciation resulting from the Ordovician cooling trend caused sea levels to drop (as more and more water was deposited in the ice sheets). As the sea levels dropped, the size of the seas decreased, leaving less space for marine species to live.