Coalbed Methane Development in Indiana by John A. Rupp and Maria Mastalerz 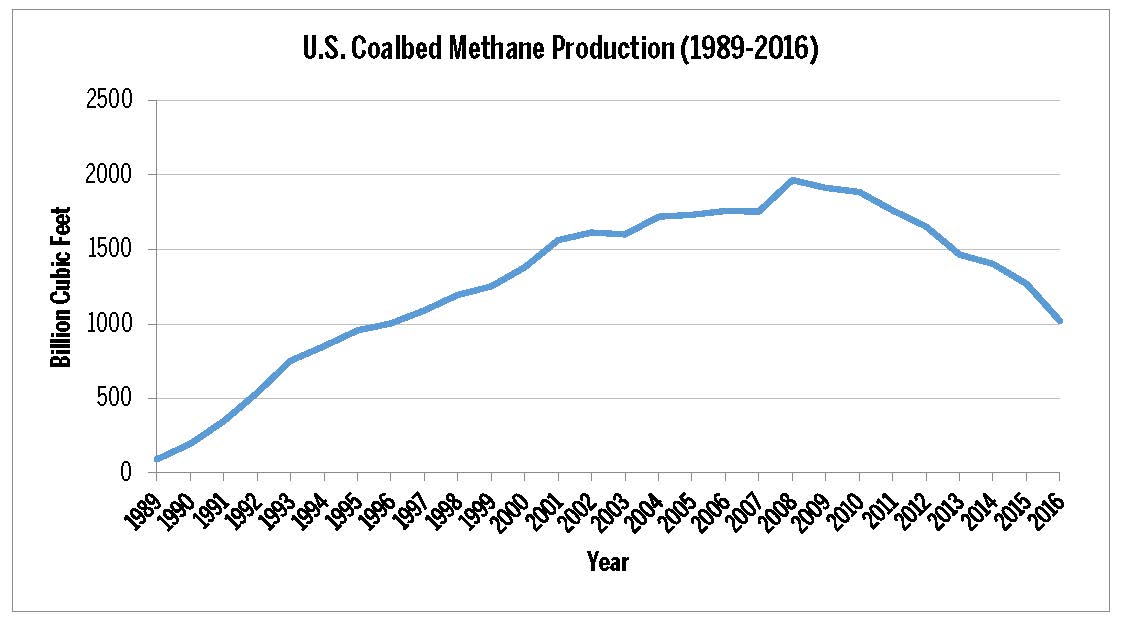 There continues to be nationwide interest in the development of coal-bed methane (CBM) as an alternative source of natural gas, primarily because of the increase in natural gas prices coupled with an increase in demand. As the nation’s demand for gas increases and conventional reserves of gas continue to decline, CBM fills an important niche in the domestic gas production portfolio. Federal energy policy recognizes the potential of CBM to help the country move toward energy self-sufficiency. Currently in 2008, CBM is estimated to be meeting 9 percent of the dry natural gas demand in the United States. Annual production is approaching 2 trillion cubic feet (Tcf).

Historically, the gas content of coals located in Indiana and in the Illinois Basin was considered to be too low for economical extraction. This same conclusion condemned much of the CBM gas resource throughout the nation. Since the year 2000, active exploration programs in several western states and also some Appalachian states have resulted in significant development of these resources. CBM is currently produced in large quantities from some basins, mainly the Powder River Basin of Wyoming, the San Juan Basin of New Mexico and Colorado, and the Black Warrior Basin of Alabama, and is beginning to be exploited in other largely untapped areas, including the Illinois Basin. Estimates by the U.S. Geological Survey estimated CBM resources in the United States at 400 trillion cubic feet (Tcf), and the Illinois Basin contains from 5 to more than 21 Tcf. 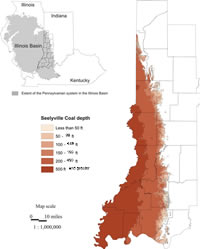 Map showing the location of the Illinois Basin in southwestern Indiana and depth to the top of the Seelyville Coal Member of the Linton Formation (Pennsylvanian), the principle seam that is exploited for coal-bed methane production in Indiana.

Data acquired by the Indiana Geological Survey suggest that the gas content of coals in particular areas within the basin may be much higher than previously estimated. In addition to the mining of the coal, production of CBM in Indiana may be an effective means to utilize a portion of the potential energy available in this resource.

A portion of the Illinois Basin is located within southwestern Indiana. This basin contains over 325 billion tons of remaining coal resources that are estimated to contain 21 Tcf of natural gas.(For comparison, the very prolific Powder River Basin of Wyoming and Montana contains an estimated 39 Tcf of economically recoverable gas. Nearly 4 billion cubic feet per day of coal-bed methane is currently being produced in the United States, with about 20 percent of it coming from the Powder River Basin.) To date, however, only a very limited amount of this gas has been developed and produced in Indiana. Five counties in southwestern Indiana are currently producing and many others have the potential for CBM gas production.

CBM can be produced from abandoned underground coal mines or from unmined single seams, as well as from multiple seams. Gas produced from the voids created by the underground mining of coal in the past is sometimes termed “mine void gas” or “gob” gas, as opposed to gas that is produced from unmined or virgin coal seams, which is always termed “coal-bed methane” or “CBM.” Two multiple-well fields that have produced CBM within Indiana are located in southeastern Sullivan County (Dugger North and Sullivan South Fields). 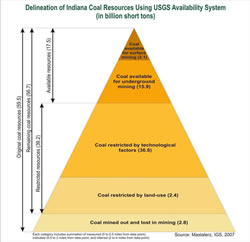 Coal-bed methane is termed an “unconventional” gas resource. This is in contrast with most “conventional” natural gas resources. The difference lies in the way in which the gas occurs within the reservoirs. In conventional gas reservoirs, the gas resides in the small pores within the rock. When the pressure is decreased by a well tapping the reservoir, the gas flows out of the pore spaces and into the wellbore. In an unconventional reservoir, however, the gas is attracted to or “adsorbed” onto the organic molecules that make up the coal. The gas is produced by drilling into the coal seam and pumping off the water, which maintains pressure on the coal. Once the water pressure is reduced, the gas molecules detach or “desorb” from the coal and flow to the surface through the wellbore. Because the production of CBM is unconventional and requires the dewatering of the coal reservoir to induce the gas to flow to the surface, many wells are required.

When the water from the coal is produced, it must be disposed of, as it is often salty and unfit for drinking. It is often disposed of by drilling wells into deep saltwater-filled reservoirs and injecting the water back into the subsurface. Also, CBM fields being located in the state may need considerable infrastructure development, including roads, pipelines, and electrical services. The effects on the quality of state’s ground-water resources by the production of CBM in Indiana have not been assessed.

Benefits of Coal-Bed Methane Use

Within Indiana, the overall increase in natural gas consumption, coupled with the use of natural gas for the generation of electricity, have significantly increased the demand for gas. The production of coal-bed methane will help provide additional indigenous natural gas for household and industrial uses and for generating power in the state.

CBM recovery also can enhance the safety of underground coal mines by reducing the amount of methane present in the coal. In the past, methane in underground coal mines caused explosions resulting in the loss of life and considerable economic damage. Methane control during underground mining is now mandated, thus increasing safety and providing the added benefit of producing an energy resource.

Considering concerns about the impact on Indiana’s air quality resulting from the burning of coal for electrical power, CBM may prove to be a cleaner energy resource derived from the state’s abundant reserves of coal.

For the state to take advantage of this natural energy resource and its benefits, significant investment in fundamental research must be undertaken. Information resulting from this research is critical for making prudent decisions that affect the energy future of Indiana. This information is required by gas exploration interests as well as public and environmental interest groups and regulatory agencies so that informed decisions regarding this resource can be made that take into account both Indiana’s economic growth and our natural environment. 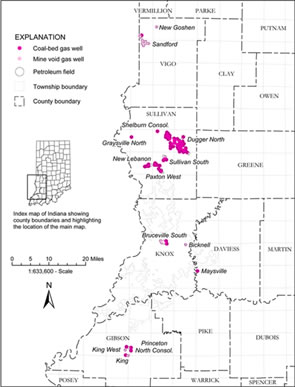 Map showing the distribution of mine void and coal-bed methane wells in Indiana.

Our understanding of the dynamics of CBM production will be increased by continued research on these topics, so decisions can be made based on sound scientific and engineering practices, sound decisions that will maximize the benefits of this energy resource and minimize any associated negative aspects. Although there are significant challenges associated with the development of this potentially very valuable and environmentally clean natural resource, these challenges are potentially surmountable. For the state to benefit from this untapped energy resource, the necessary research investment must be made so that we can address these challenges.

The Indiana Geological and Water Survey (IGWS) has been actively involved in the study of coal-bed methane. For years IGWS researchers have been involved in quantifying the volume, distribution, and quality of coal available in Indiana. Large quantities of new data on the amount and the character of coal gas have been collected in recent years. The IGWS maintains facilities and staffing to assess various aspects of coal quality, the physical and chemical characteristics of coal, and the properties of gas.