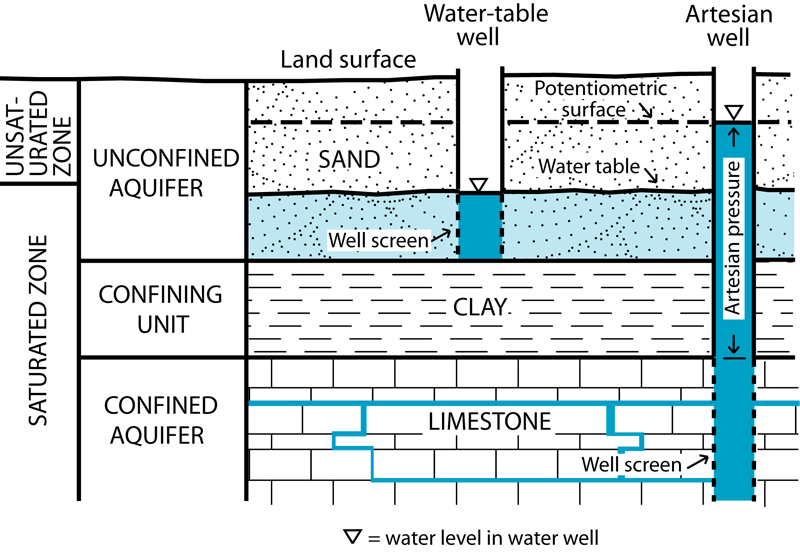 Figure 1.
Diagram illustrating the relations between water levels and wells in a sandy water table aquifer and a confined bedrock aquifer.

Residents of Allen County rely heavily on in the underlying strata for drinking water, irrigation, and industrial uses. When a water well is drilled,information about the type of rocks and sediments encountered in the borehole is submitted to the Indiana Department of Natural Resources, Division of Water in the form of a standard well construction report. The water level measured in the completed well is also reported and, in conjunction with water-level data from many wells in an area, can be used to make water-level maps for specific aquifers or aquifer systems.

Measured water levels in wells broadly represent either the or the , depending on whether the aquifer is unconfined or confined. An unconfined aquifer lies immediately below the land surface and has little if any other sediment above it (fig. 1).

A good example is a gravel body along a river. The water table in the gravel will be similar in elevation to the water level in the adjacent river, and represents the top of the zone of saturation-the depth below which all available spaces between the individual pebbles are filled with water. Above the water table, the spaces are filled by a mixture of air and water. Groundwater in such unconfined aquifers is in direct contact with both surface water (the adjacent river) and with the atmosphere. The water table represents the point in the system where the pressure is exactly equal to atmospheric pressure. Within any given landscape, the shape of the water table is generally a subdued replica of the surface topography, being elevated below uplands, and forming low areas below valleys (fig. 2).

The flow of groundwater follows the slope of the water table, moving from high areas where groundwater recharges, to low areas where it discharges into surface streams and lakes. At any given place, the elevation of the water table varies seasonally, typically being greater during wet periods, such as late winter through early summer, and lower at other times. The water table can be identified throughout Allen County, but it mostly occurs in the fine-grained sediments that make up the majority of the surface sediment in the county. The only places where aquifers occur at the surface under true water-table conditions are in parts of the Eel River Valley and Wabash-Erie Channel, where the tops of large, saturated sand and gravel bodies are exposed at the surface (fig. 3).

In Allen County, most aquifers are confined by various thicknesses of glacial till and other fine-grained sediments that inhibit the ability of the water in these aquifers to directly interact with either the atmosphere or surface water. Such aquifers are referred to as "confined" or "" aquifers, defined by the fact that the water level in a well typically rises well above the top of the aquifer. The water-level behavior is the manifestation of hydraulic head in the aquifer, which consists of two parts: elevation and pressure. If the water in the well rises above the surrounding land surface, the well is referred to as a flowing artesian well (fig. 4), a condition that is rare in Allen County. These conditions occur locally along the extreme northern part of the Maumee Lacustrine Plain in eastern Allen County.

Figure 3.
Cross section showing the relationship between the water table, perched water table, potentiometric surface, and zone of saturation (shaded) in confined and unconfined parts of a sand and gravel aquifer and the overlying till confining unit. Fleming (1994).

The distribution of water levels seen in wells in a confined aquifer typically produces a pattern that broadly mimics the configuration of the overlying landscape: higher beneath uplands, lower beneath lowlands. When the water-level data are mapped using elevation contours, the result is known as the potentiometric surface of that aquifer. Although similar in concept to the water table, the potentiometric surface is an imaginary surface that indicates approximately how high water would rise in a well developed at any given place in the aquifer. In reality, the confining unit over the aquifer prevents the water level from rising above the top of the aquifer under natural conditions. A well drilled into the aquifer acts like a pinhole in a balloon: the pressure in the aquifer causes the water to rise to an equilibrium level. All of the major aquifer systems in Allen County are confined, and their water levels are represented by their respective potentiometric surfaces. Groundwater within any one of these aquifer systems flows down the slope of the potentiometric surface, from higher to lower elevations. It should also be noted that hydraulic head varies vertically within a confined aquifer: below elevated regions, flow is generally downward through the aquifer, from higher head to lower head, whereas the opposite is true beneath low-lying regions of the landscape. This pattern is both logical and essential: without it, there would be no recharge or discharge to or from aquifers. 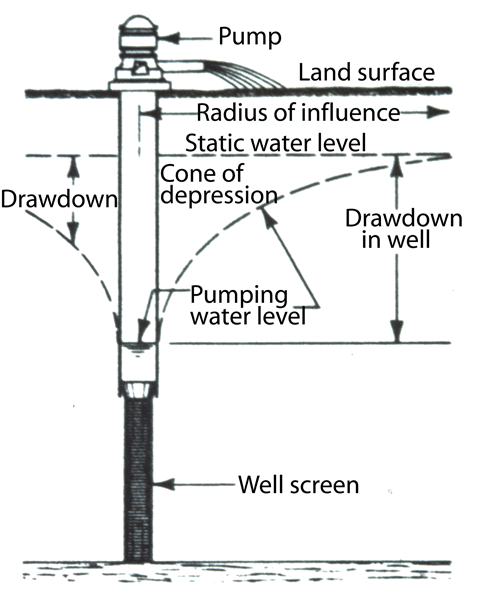 Figure 4.
Diagram showing the relations between well construction, pumping, and the development of a cone of depression in the surrounding water table. From Fleming (1994).

This is the most widely utilized source of water in the county: many household, industrial, and municipal wells pump water from the bedrock, particularly in the southern half of the county. According to Fleming (1994) most of the bedrock aquifer is confined by 40 ft to more than 250 ft of unconsolidated sediments. The potentiometric surface of this aquifer is shown on the interactive map site. Large-scale groundwater withdrawals associated with high-capacity wells and quarries locally influence the potentiometric surface by creating cones of depression-places where water levels in adjacent parts of the aquifer are drawn down substantially (fig. 4), and remain so as long as the water withdrawals continue.

The size and shape of these change over time, as does the configuration of the potentiometric surface. The maps on the interactive map portion of the site reflect the conditions in the early 1990s, when the data used to make the maps were collected (Fleming, 1994).

Figure 5.
Cross section of the Huntertown interlobate region showing how different aquifer geometries affect the sensitivity of the Huntertown aquifer system to contamination under otherwise similar terrain conditions. From Fleming (1994).