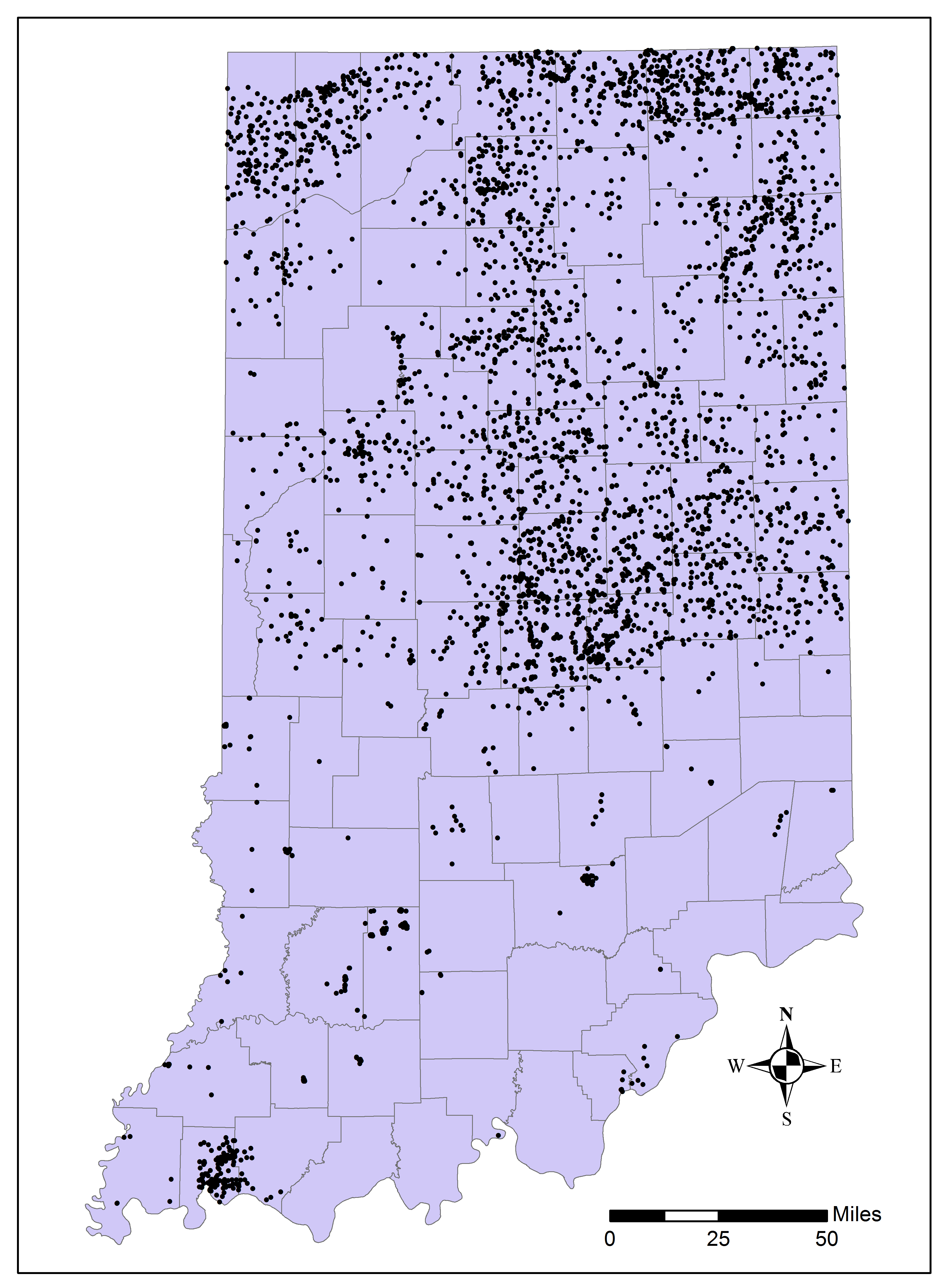 Downhole logging of unconsolidated and materials has long been a component of site-specific engineering, groundwater, and environmental studies conducted by consultants in areas of the midwestern United States and Canada (Bleuer, 2004). It has now become a fundamental component in larger-scale exploration and terrain characterization.

The Indiana Geological and Water Survey (IGWS) began a program in 1976. Since then, more than 4,000 log profiles have been collected (fig. 1). These log data provide a basis for IGWS studies, including large regional-scale mapping, 1:48,000-scale quadrangle mapping, groundwater modeling, and concentrated countywide environmental and analysis.

Gamma-ray logs have two fundamental benefits that make them important to studies of geological materials: (1) they provide a basic analysis of grain size and, (2) they can be collected in any form of cased borehole, above or below water.

Gamma-ray logs record of gamma radiation received by a detecting crystal over a specified time period. Gamma radiation is emitted during the radioactive decay of , , and elements of their decay series, and from the decay of the unstable isotope of , . 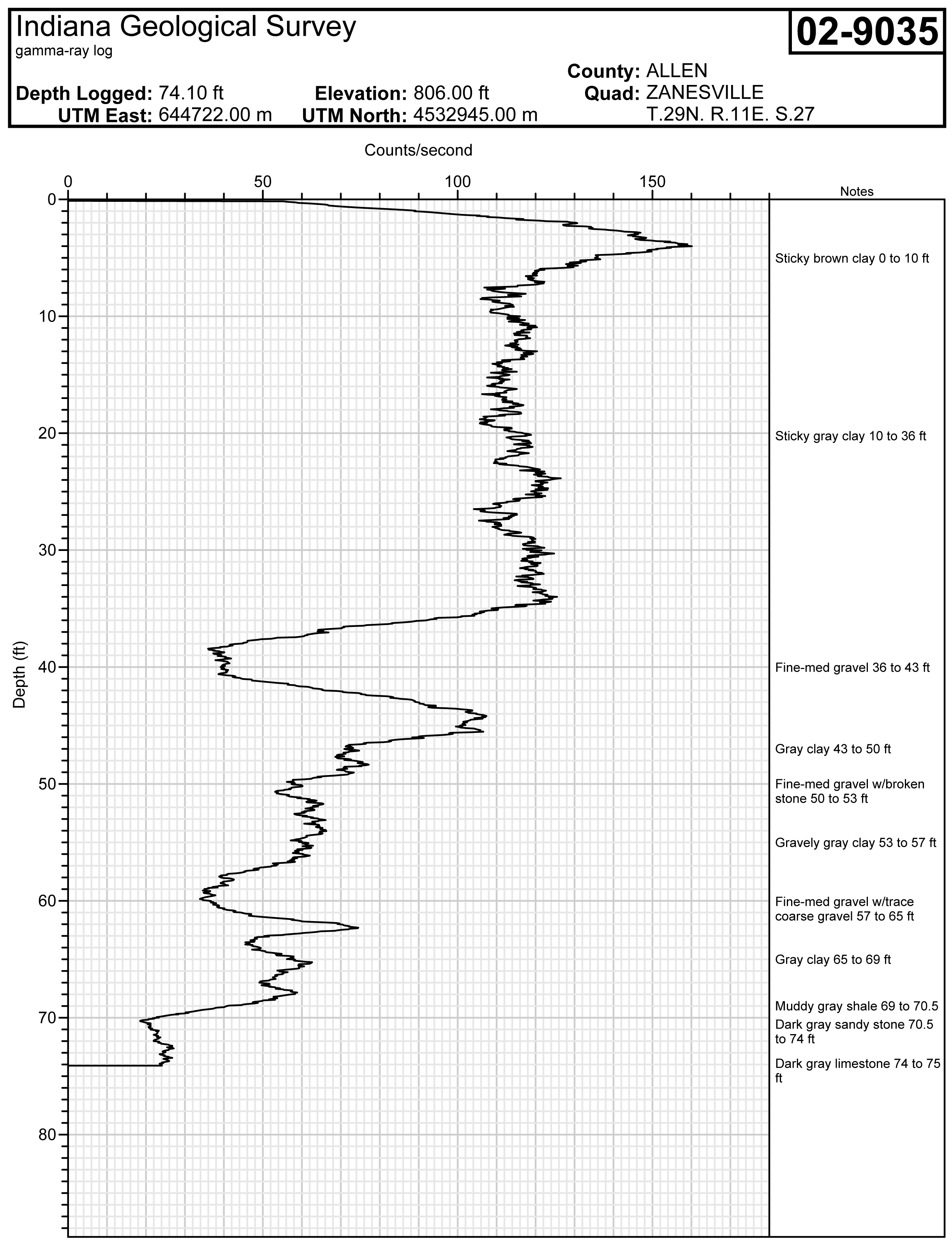 In midwestern environments, the gamma-ray log measures "shaliness" in and minerals which make up the glacial sediments. The log is a reflection of the radiation emitted by potassium-40 contained in , which dominates the clay-mineral component of shales and Pleistocene glacial sediments (Bleuer, 2004). In some black shales, the gamma-ray log also responds to uranium associated with organic matter. Glacial sediments rich in clay, such as or mud, produce a high gamma-ray count, well-sorted granular materials (sand and gravel) log low, with quartz- or carbonate-rich materials logging lowest. Thus, the gamma-ray log has the capacity to illustrate grain-size variations as small and subtle as horizons within surface soils, and as gross and obvious as major breaks within thick sections (Bleuer, 2004).

Glacial sediments exhibit variations in depositional processes and environment and will therefore display a typical log profile (fig. 2). Sediments with uniform physical properties, such as some glacial tills, tend to produce a correspondingly uniform gamma-ray profile. In contrast, sediment assemblages with wide variations in grain sizes (sand and gravel), or characterized by interstratification of fine- and coarse-grained sediment such as debris flows, will display a less uniform gamma-ray profile. These characteristics can be used to identify and trace individual units and sediment assemblages in the subsurface. They may also assist in interpreting material descriptions on water-well records (Fleming, 1994; Bleuer, 2004). 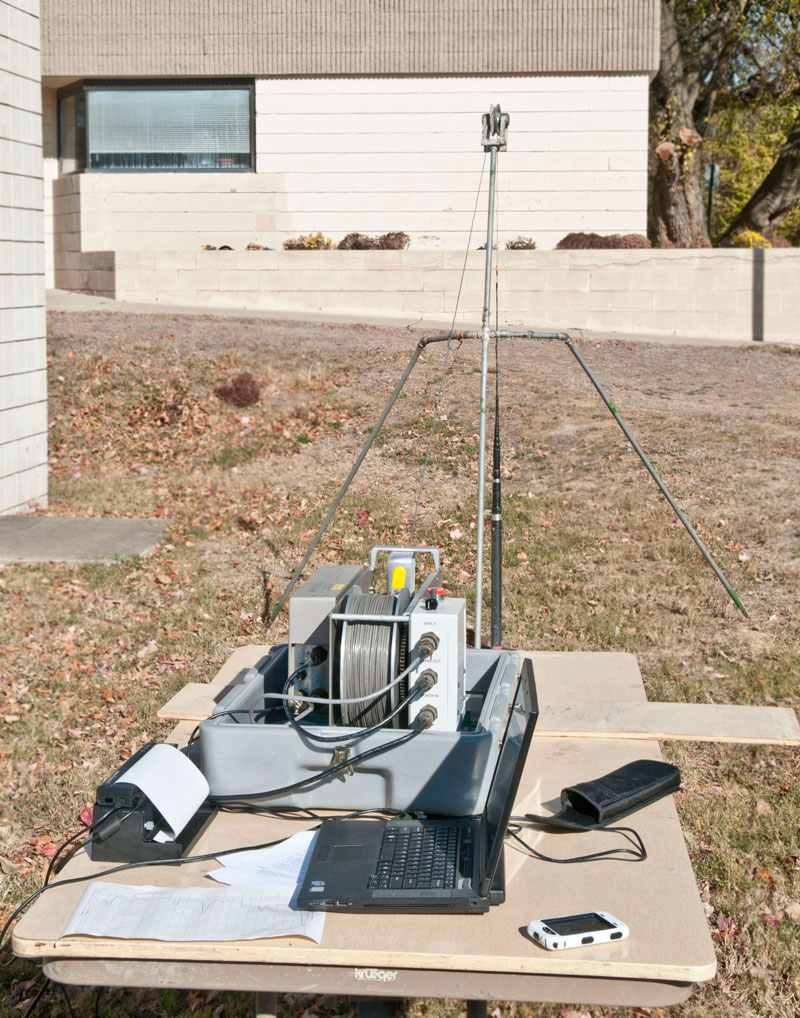 The gamma-ray log is a fundamental component of the IGWS approach to glacial-terrain characterization. For 25 years, IGWS seasonal programs put sampling/logging operations in the field alongside local water-well-drilling contractors throughout the state. IGWS geologists and staff collected cuttings from mud-rotary drill operations on a daily basis throughout the summer field season (May-September) and from contracted test holes. Samples were collected at 2- to 5-ft intervals and at major sediment changes, drained, and stored in paper cups to avoid crushing the clays. IGWS personnel collected gamma-ray logs of the wells prior to pump installation. Current programs focus on contracted test holes and the collection of continuous cores of sediment. Both analog and digital logs are collected in the field (fig. 3). Logs and their corresponding sample sets are analyzed, interpreted, and archived at the IGS.

In Allen County, gamma-ray logs were used to show bulk differences in grain size, as well as mode and environment of deposition of the glacial sediments (Fleming, 1994, 1998a, 1998b). The relationship between the gamma-ray log signature and physical properties of the associated sample sets aided in the determination of specific depositional sequences. This relationship was used to help determine and map major glacial aquifers and confining units across the county.