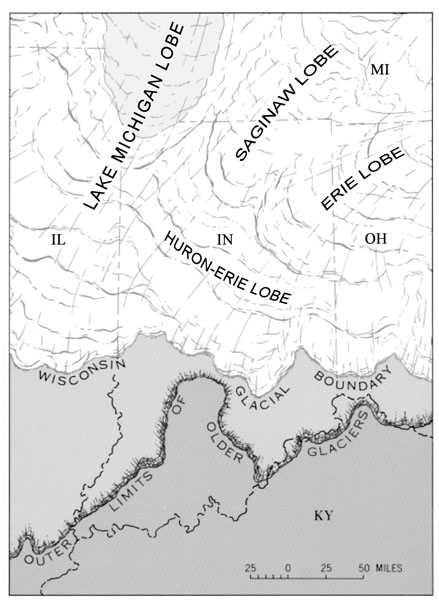 Figure 1.
Diagram showing origin and distribution of glacial lobes in the upper Midwest. Modified from Bleuer (1974).

Unconsolidated sediments of age underlie all of Allen County and range from about 30 ft to more than 300 ft in thickness (Fleming, 1994). Differences in thickness are attributable to as much as 200 ft of relief on the bedrock surface and to variations in the amount of glacial sediments deposited. Allen County experienced repeated glacial advances from both the north and east throughout the , and deposits ranging in age from late to perhaps as old as pre- are present. However, the bulk of the glacial deposits are associated with three glacial episodes of late Wisconsin age. The thickest deposits are in northern Allen County, where late Wisconsin sediments deposited by both northern source ( ) and eastern source ( , ) ice overlie locally thick sections of pre-Wisconsin age (figs. 1 and 2).

Deposits are considerably thinner in southern and eastern Allen County, and are almost entirely eastern source sediments deposited during the late Wisconsin. In addition to sediments deposited in direct association with glacial ice, a variety of postglacial deposits are also present, as are extensive bodies of sediments associated with several phases of ancestral Lake Erie.