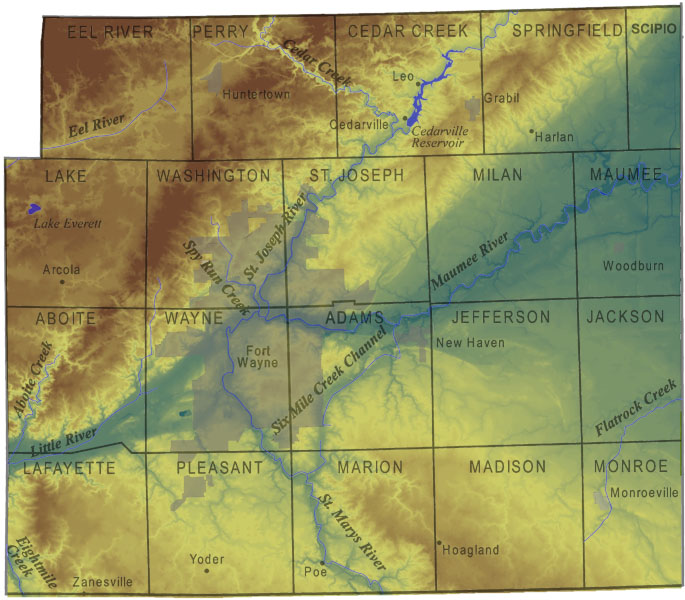 Figure 1.
Map of Allen County depicting the elevation of the ground surface using gridded spatial data. Blues and greens are the lowest elevations and dark browns are the highest elevations in the county.

Many areas within the United States have DEMs available with 10-meter spacing, and these are downloadable from companies and agencies that have partnered with the U.S. Geological Survey. Some states, counties, and municipalities are funding the creation of DEMs with an even greater level of detail. The DEM of Allen County on this website is part of the newly created statewide digital elevation model for Indiana. Coverage for the entire state is available for download from the Indiana Spatial Data Portal. The resolution of this data set is very high (5-ft grid), making the model of the land surface much more detailed and precise than earlier versions.

A digital elevation model can be viewed in many ways using computer enhancements in GIS software programs. Various color ramps may be applied indicating the different elevations. Hillshading is a process that produces a shadowlike effect based on the elevations of the DEM, illuminating hills and valleys in two-dimensional map views. The hillshade may be viewed in shades of gray as seen in fig. 2 or it can enhance a colored version of a DEM in a map view. Three dimensional views can be created using the DEM and applying specific vertical exaggerations to help visualize the relief of the landscape, as seen in fig. 3. 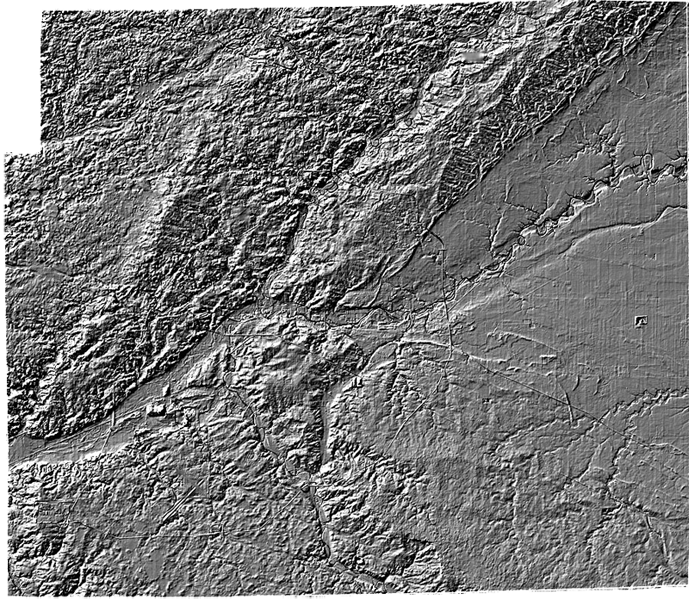 Figure 2.
Map of a hillshaded version of the digital elevation model of Allen County.

Figure 3.
A three dimensional diagram of the digital elevation model map of Allen County with a 10X vertical exaggeration applied. The view is from the southwest.

By viewing the terrain represented in this DEM of Allen County, it is possible to observe the surface expression of the latest geologic events in the area. The most recent period of glaciation left a variety of landforms, such as moraines, till plains, outwash valleys, and ancestral lake bottoms. According to Fleming (1994), the county can be divided into three physiographic regions (fig. 4) demonstrating these very different landform features. The northern part of the county (landscape B, in fig. 4) is more rugged and has hummocky moraines and low areas containing wetlands, lakes, and peat bogs. This area has much more relief than the rest of the county and is part of a larger area called the Steuben Morainal Lakes Area. A former outwash valley, the Wabash-Erie Channel, divides the northern part of the county from the southern part of the county. 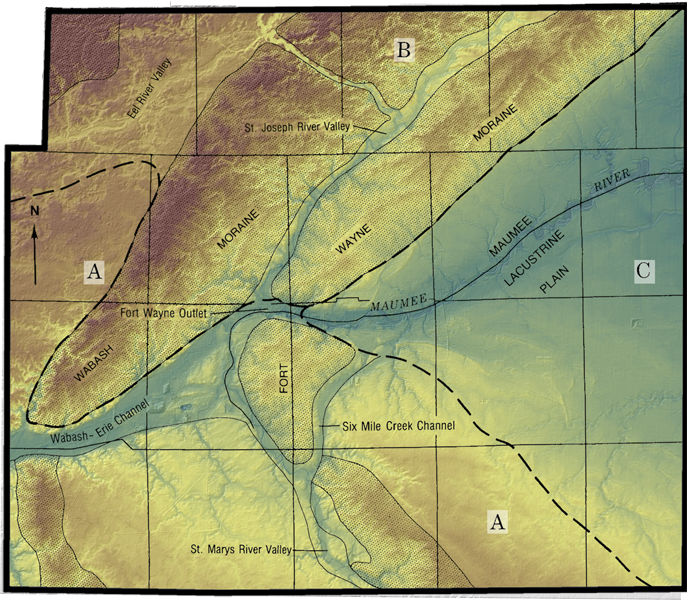 Figure 4.
Digital elevation model map of Allen County with an outline of the major physiographic regions of the county defined by dashed lines: A = the Tipton Till Plain, B = the Steuben Morainal Lakes area, and C = the Maumee Lacustrine Plain (Fleming, 1994).

The topography of the southern portion of the county (landscape A) is less rugged and is part of the larger region called the Tipton Till Plain. Two moraines left by the latest glacier cross the landscape of this region, however, most of the region is a gently rolling till plain. The eastern part of the county (landscape C, in fig. 4) has very little relief and man-made drainage ditches can be seen throughout the landscape. This area is the relict lake-bottom of the ancestral Lake Erie—Glacial Lake Maumee—and is called the Maumee Lacustrine Plain.